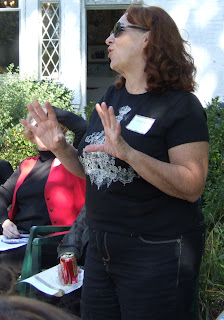 We were delighted to have Joanne Hulme and her grandson Joshua attend our meetings on Sunday afternoon, October 5, and October 19, 2008, at Tudor Hall. Joanne is the great-great granddaughter of Junius Brutus Booth's sister Jane who married James Mitchell. Joanne brought some photos, books, and other items of family memorabilia to share at both meetings.
Posted by Spirits of Tudor Hall at 8:22 PM No comments:

Be sure to check out the photos from the meeting in the post below.

On Wednesday evening, September 17, 2008, 30-35 people attended the first meeting of Spirits of Tudor Hall. Twenty-two people filled out contact sheets offering to serve as volunteers in a variety of ways, including a good number who are interested in leading tours. In addition, 16 people who could not attend the meeting have expressed an interest in volunteering. Needless to say, this is a very exciting and encouraging response.

The interests, skills, and qualifications offered by the volunteers are simply amazing. The list includes history addicts of various kinds, actors, musicians, dancers, librarians, photographers, writers, experienced researchers, public school and college teachers, people who have served as docents at Tudor Hall and other historic sites, young people who are excited about learning more about Tudor Hall, people with "willing hands" to offer for a variety of tasks, and on and on.

I am really looking forward to getting to know each one of you and to putting you to "work."

To summarize the meeting:

I then took everyone on a whirlwind "tour" through the seven page handout I'd prepared for the meeting. I can email or snail mail a copy of the handout to anyone who would like one.

The handouts include a reading assignment: American Gothic by Gene Smith followed by John Wilkes Booth: A Sister's Memoir by Asia Booth Clarke (edited by Terry Alford) and Junius Brutus Booth by Stephen M. Archer. I also recommended American Brutus by Mike Kauffman to those interested in learning more about the assassination.

I was in a hurry because we had three very exciting guests: Susan Wooden, Kathy Scholl, and Vern Hart who are docents and re-enactors associated with the Hays House (oldest house in Bel Air) and Jerusalem Mill (historic site on the Gunpowder River). They were all dressed in costumes which they described at some length. Vern also provided me with some wonderful resource info for researching and purchasing Civil War era costumes which I will be including in the docent handbook.

We closed the meeting with some quick questions from those attending the meeting. Then we adjourned for refreshments and socializing. A number of people brought delicious goodies to share (thank you!), and Kathy Cochran of the Center for the Arts baked fresh cookies in the Tudor Hall kitchen just before the meeting which filled the house with a delicious, welcoming aroma.

The next meeting of Spirits of Tudor Hall is scheduled for Sunday afternoon, October 5, at 2:00 PM at Tudor Hall. Volunteers who attend will be given a tour of Tudor Hall, and I hope to have the first installment of the docent handbook ready to distribute at that time.

More details about the October 5th meeting will follow.

Knock on wood, Spirits of Tudor Hall appears to be off to an excellent start, and I want to thank everyone far and wide who is with us "in spirit."

Dinah Faber
Posted by Spirits of Tudor Hall at 5:40 PM No comments: 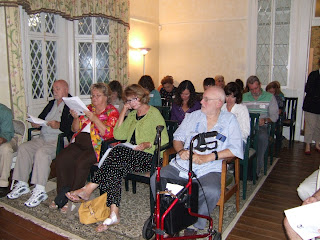 Jill Redding (in red flowered blouse). Jill is a professional actress with a long history with Tudor Hall and an interest in murder mystery theatre. Jill appeared in 10 episodes of season two of The Wire.

Elwin Penski (far right in blue shirt) founder of the Junius B. Booth Society (http://juniusbooth.org/) and webmaster for the Historical Society of Harford County website. Elwin also prepared the wonderful framed poster that hangs in the "Booth Room" at Tudor Hall.

In third row on far right in green striped shirt: Lee Pucklis, theatre professional who does a lot of work in Philadelphia and whose parents live in Harford County. 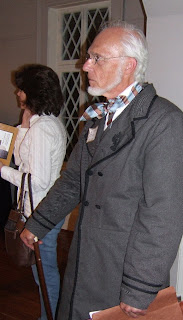 Vern Hart wore the costume of a gentleman of the Civil War period and discussed his costume in detail.

Cindi Leyko-Fleischman (left) spoke to Kathy Scholl after the meeting.
Kathy Scholl wore the attire of an 18th century woman of "middling" means. Kathy removed some of her outer attire to reveal her petticoat, pockets (tied on a string around her waist), and corset. Fascinating! 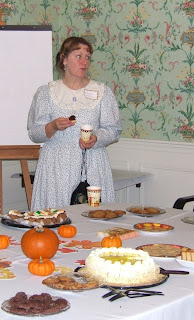 Susan Wooden enjoying the refreshments served in the dining room after the meeting. A big THANK YOU to Susan, Kathy, and Vern for such an interesting, informative, and fun presentation! 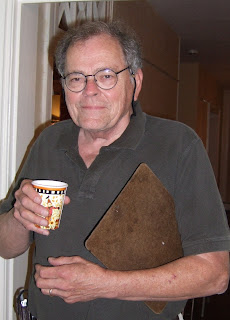 James T. Wollon is the great-grandson of Ella Harward Kyle Mahoney who lived at Tudor Hall from 1878 until her death in the house in 1948. Her first husband Samuel A. S. Kyle bought Tudor Hall as a wedding gift for his young bride. Jim is a preservation and restoration architect.
Posted by Spirits of Tudor Hall at 5:40 PM No comments: