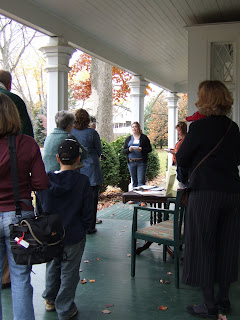 Caitlin Cox lead tours on Sunday, November 2, and again on Saturday, November 8 (when this photo was taken). Caitlin became fascinated by Tudor Hall and its history when she visited Tudor Hall as a child. 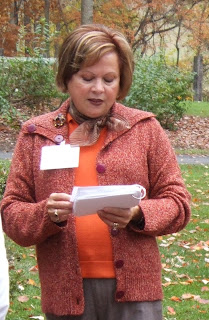 Mike Brown lead the first tour of the day on Sunday, November 2, at 1:00 PM. Mike has done a lot of "homework" and written a script of his own that includes many stories from Asia Booth Clarke's The Unlocked Book (also published as John Wilkes Booth: A Sister's Memoir edited by Terry Alford). Mike also added some "dramatic" flourishes to his tour which got everyone's attention and were well received. Mike will be leading the 1:00 PM tour on Saturday, November 8th.

Lexi Uhland assisted with the tours on November 2nd, and her assistance was a big help. Volunteer tour guide Joyce Bauer observed Mike's tour as part of her preparation for leading her first tour of Tudor Hall on Saturday, November 8, at 3:00 PM. If you look carefully (left click on the above photo to see an enlargement) Lexi (in pink) and Joyce can be seen in the background. 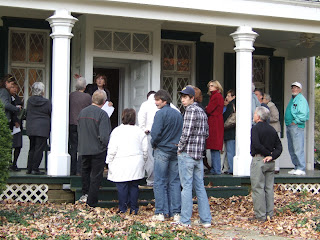 Kris Thomson lead the second tour on November 2, at 2:00 PM. For more info about Kris, see below. Caitlin Cox and her mother Debbie Hargrove lead the 3:00 PM tour as a team. Caitlin and Debbie can be seen at the far left of this photo. (Left click on photo for enlargement.) Caitlin has fond memories of visiting Tudor Hall as a child and persuaded her mother to join her in leading tours with her this fall. Caitlin and Debbie make a great team, and we are so pleased to have them with us. 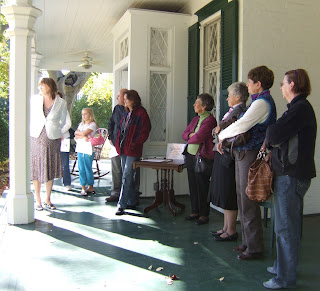 Kris Thomson did us the honor of leading the first official Spirits of Tudor Hall tour at 1:00 PM on Sunday, October 26, 2008. Kris was the lead tour guide at Tudor Hall during the years Howard and Dorothy Fox owned the property (late 1960s to late 1990s). Kris was also active in the Preservation Association for Tudor Hall (PATH). We are delighted Kris is taking an active role in helping us launch our new tours. 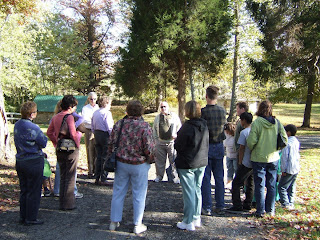 Don Rutter (center of photo, facing camera) lead the third tour on October 26 at 3:00 PM. Don is an experienced tour guide who has led tours at Oriole Park/Camden Yards as well as trolley tours in downtown Baltimore. Don studied hard in preparation for leading his first tour at Tudor Hall and has gained an amazing amount of knowledge of the Booth family since attending our first meeting on September 17, 2008. We are very fortunate to have such an enthusiastic and committed volunteer!

Kathy Cochran of the Center for the Arts led the middle tour on October 26 at 2:00 PM. Kathy's delight in Tudor Hall and its history is obvious, and Kathy's assistance with numerous aspects of the volunteer program has been invaluable.

All told, over 80 people have attended our tours so far this fall. Needless to say, we are delighted to be off to such a great start!
Posted by Spirits of Tudor Hall at 6:39 PM No comments: