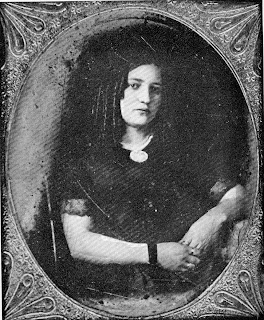 This photo was originally posted on the blog for Valentine's Day 2009.

In 1821 Mary Ann Holmes left England in the company of a young, rising English actor named Junius Brutus Booth. They sailed to the United States by way of the Island of Madeira. After their arrival in Virginia, Booth almost immediately went on stage and thus began a wildly successful career in the New World that would last for over thirty years. Mary Ann would give birth to ten children, many of whom were born on the Booth farm in Harford County, Maryland, where Tudor Hall would be built by Junius and Mary Ann in 1851-52. The fact that Junius left behind in England his first wife, Marie Christine Adelaide Delannoy Booth, and a son named Richard Junius Booth, would cloud Junius and Mary Ann's relationship for the rest of their lives. Nevertheless, Junius and Mary Ann shared a great and romantic love that lasted until Junius's death in 1852 and beyond.


Posted by Spirits of Tudor Hall at 9:42 AM No comments: