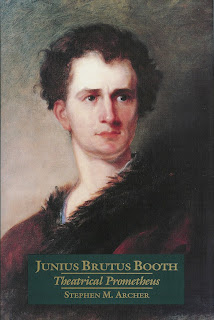 Southern Illinois University Press recently launched the paperback edition of Junius Brutus Booth: Theatrical Prometheus by Dr. Stephen M. Archer. This biography of the patriarch of the Booth family was first published in 1992 and remains the definitive work on the life of one of America’s most successful and well-known Shakespearean actors of the early to mid-1800s. No other biography of Junius B. Booth Sr. has been published since 1992.

Dr. Archer taught theatre history and research methods at the University of Missouri at Columbia from 1971 until he retired in 1998. He is also the author of two theatrical bibliographies, several textbooks, and numerous articles on the theatre.
With the support and assistance of his wife, Kelly, Dr. Archer spent nine years researching and writing Junius Brutus Booth. The Archers agree that researching the gifted and eccentric actor was a fascinating experience, and they recall meeting a number of charming people in the process, including Dorothy and Howard Fox at Tudor Hall in the 1990s.
In 2004, Dr. Archer donated the bulk of the materials he collected while researching his book to the Booth Research Center of the Historical Society of Harford County. Volunteer Emily Andrews is currently creating electronic catalog records, which will eventually be available online, for the Stephen M. Archer/Junius B. Booth Collection.
Copies of the paperback edition are available via the Southern Illinois University Press website: http://www.siupress.com/product/Junius-Brutus-Booth,5564.aspx. It is also available at amazon.com. In addition, a download of the hardback edition of the book can be purchased on the Questia website.

Be sure to click on "Older Posts" below to read more.
Posted by Spirits of Tudor Hall at 3:57 PM No comments: