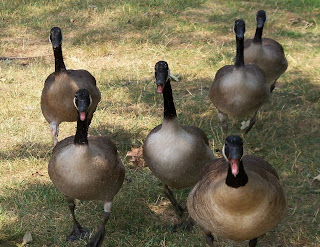 Regular visitors to Tudor Hall have been keeping an anxious eye on this family of Canadian geese all summer. The goslings have grown so large it is difficult to tell them from their parents except for the fact that the parents continue to be so protective of their young and to herd them away whenever anyone approaches (unless that person has brought a treat--don't forget feeding wild animals including geese and ducks is discouraged by the Department of Parks and Recreation). In fact, the goslings are so grown up, the geese may have already flown to explore other parts of Harford County.

Photo by Kim Edwards.
Posted by Spirits of Tudor Hall at 1:08 PM No comments:

Jill Redding Recognized by the Daughters of the American Revolution 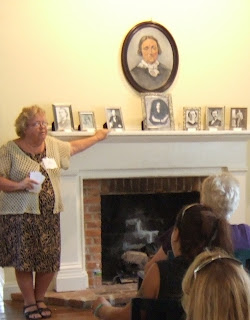 Jill Redding telling visitors to Tudor Hall about
Mary Ann Holmes Booth and her children.
The summer 2010 issue of the newsletter of the D.A.R. William Paca Chapter recently announced that Jill Redding placed third in the state for her community service work as a volunteer at Tudor Hall in 2009. Jill has drawn upon her experience as a professional actor to serve as a coach for the Spirits of Tudor Hall tour guides for the past three years. In addition, Jill recently teamed up her fellow volunteer Kim Edwards to lead a guided tour at Tudor Hall on Sunday, July 25, 2010. It was the first time either one of them had led a tour, and they both did a great job. 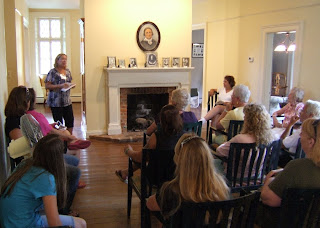 Kim Edwards stepped out of her role as reservations manager to team up with Jill Redding to lead a tour at Tudor Hall on July 25. Kim is especially interested in the architectural features of of Tudor Hall. 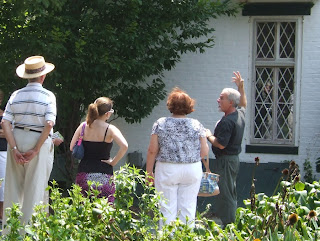 Mike Brown pointed out architectural features at Tudor Hall on one of the hottest days of the summer. Even though the heat index was in the mid-100 degree range, over 50 people toured Tudor Hall on Sunday, July 25th.


Please be sure to click on "Older Posts" to read more.
Posted by Spirits of Tudor Hall at 2:56 PM No comments:

There was a lot of "luck" for those attending the potluck supper at Tudor Hall on Saturday evening, July 17, 2010. There are many gifted cooks among our active volunteers. 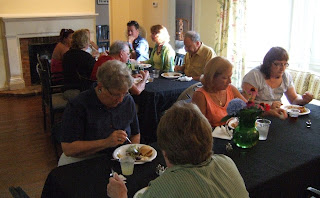 On Saturday evening, July 17, 2010, fifteen "Spirits" braved the hot and humid weather to partake of a potluck supper at Tudor Hall. The food was delicious, and the company lively and in good spirits. We were especially pleased to have Emily Andrews and Judy Rogers of the Historical Society of Harford County join us. Emily is heroically preparing electronic catalog records for the Dr. Stephen M. Archer/Junius B. Booth Collection under Judy's supervision. Judy is a retired school librarian who has taken on the daunting task of supervising the creation of an electronic catalog for all the items in the historical society's vast holdings.

(Emily appears in the navy blue shirt in the above photo. Judy, wearing a green shirt, is sitting opposite Emily with her back to the camera.)
Posted by Spirits of Tudor Hall at 12:55 PM No comments: