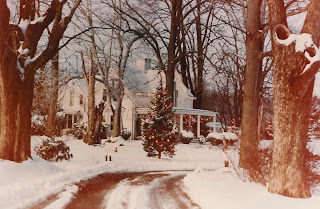 This photo appeared on the cover of the very first issue of PATHWAYS, the newsletter of the Preservation Association for Tudor Hall, which was published in November 1984. The photo also appeared on Christmas cards sent by Howard and Dorothy Fox who made Tudor Hall their home from the late 1960s to the late 1990s. (Photo by Sally Cassilly courtesy of Jill Redding) 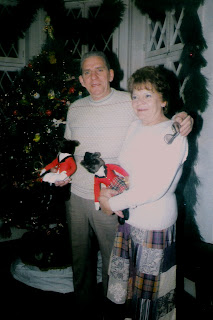 This photo of Howard and Dorothy Fox was taken at Tudor Hall in 1985 by Booth scholar Mike Kauffman. Mike recalls, "The annual Christmas party was their favorite big event, and they went all-out to make it a special occasion."

According to veteran Tudor Hall tour guide Kris Thomson, Howard Fox made a resolution one Christmas while serving in Europe and North Africa during World War II that, if he survived the war and returned home, he would always celebrate Christmas in a big way, and he and Dorothy certainly kept that resolution over the years at Tudor Hall. (Photo courtesy Mike Kauffman) 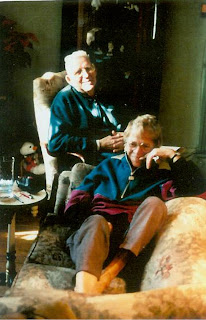 This beautiful photo of Howard and Dorothy Fox was taken during the last Christmas season they spent together at Tudor Hall in 1998 and captures the generous and outgoing spirit of these two remarkable people who graciously opened Tudor Hall to innumerable visitors over the 30 years they owned Tudor Hall. Unfortunately, Howard and Dorothy both died within a few short months after this photo was taken. (Photo courtesy Ann Phillips and Jill Redding)
Posted by Spirits of Tudor Hall at 12:42 PM No comments: