Was the Booth Farm Used to Help Runaway Slaves? 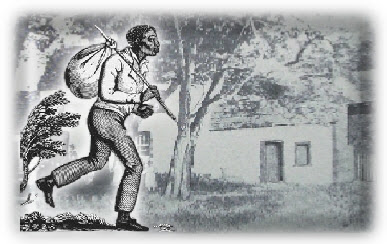 While visiting with Elwin Penski (founder of the Junius B. Booth Society) one afternoon, he mentioned to me that he believed Richard Booth, the father of Junius Brutus Booth, had assisted escaped slaves when he resided at the Booth farm in Bel Air, MD, though he couldn’t recall a source to back up his belief. His statement piqued my curiosity and I immediately decided to investigate that claim. Not only could this change the way the general public perceives the Booth family, but it could possibly shine a new light on the history of the Booth farm.
To make a long story short, while I was in correspondence with Dr. Terry Alford, a history professor at Northern Virginia Community College and a Booth historian (his biography of John Wilkes Booth will soon go to print) he directed me to a manuscript written by John T. Ford (who built and owned the theatres named after him in Baltimore and Washington) housed at the Maryland Historical Society.
I followed his lead and found the manuscript located in the John T. Ford Manuscript Collection, MS 371, Maryland Historical Society. In a folder titled FORD MANUSCRIPTS: The Booth Family, there is a penned letter he wrote to the Editors of the Gazette. Whether he sent this letter or not, I do not know; however— it is a goldmine.
The following is an excerpt from Ford’s manuscript just as he wrote it, including the words he crossed out with a single line:

“Editors of the Gazette
Gentlemen,
In the report of the “Surratt trial” published in yr paper on Thursday I notice a gross inaccuracy that I presume was the fault of the Reporter rather than the mistake of the eloquent counsel for the defense (Mr. Bradley).  I will correct the statement as briefly as I can by saying that it was the Grandfather Richard Booth not J.B. Booth Sr. that allowed the Red Republicanism of which he was so fully imbued to in   was a thorough Red-Republican.  He lived in its day and was himself an ardent admirer of “John Wilkes” of the North Briton.  He came to this country and state an old man and settled in Harford County with his son. He was an extremely brilliant but very erratic man and commenced here practically to develop his ideas of right in that direction by aiding slaves servants to escape into Pennsylvania.  His evident sincerity in the cause of human rights, his unbalanced mind and the popularity of his son together saved him on several occasions from prosecution although the son (J.B.B. Sr.) did on more than one occasion pay for the a escaped runaway.”

John T. Ford was well acquainted with the Booths. Junius, Edwin, and John performed at his theatres and he had a working relationship with them, and no doubt a personal relationship as well. Though John’s manuscript is not dated, it was obviously written at the time of the Surratt trial, so the events of the assassination and his relationship with the Booths would be fresh in his mind. I believe John Ford is a solid, credible source and to be believed.
Richard Booth moved to America in 1822 and resided with his son Junius. When Junius obtained the Harford County land for his farm in 1824 and moved a log house to the property, his father, Richard, remained with his son and lived at the Booth farm till shortly before his death in 1839. This leaves at least a 15 year time frame for Richard to help slaves to escape to Pennsylvania. The Booth farm was basically isolated and is located along a route that led to Pennsylvania. The farm was mostly wooded and fairly large, 177 acres by 1825 (see note) and would provide sufficient cover to shelter runaway slaves during their exodus to Pennsylvania.
During the years Richard resided at the farm, it was extremely dangerous to assist escaped slaves—in fact it was criminal. Richard and Junius risked everything by helping them. Obviously, because of the danger in being discovered, they would not have told anyone what they were doing, unless they had absolute trust in whom they confided. Likewise, the slaves would not have revealed who their benefactors were for the same reason.
By the time John Ford wrote this manuscript, Richard and Junius were no longer living; the Civil War had ended; the thirteenth amendment was in place, and more than twenty-five years had passed since they aided the runaways.
This information adds to the history of the Booths and the Booth farm. For the general public who are only familiar with John Wilkes Booth, Ford’s statement shines a new light on the Booth family. The Booths were truly a house divided.

Note: I contacted Michael Pierce, an experienced Harford County historical research mapmaker, and he offered to help me map out the original Booth farm. With detailed research and using the latest mapping software, he determined that Junius obtained 159.25 acres in 1824. The following year he obtained a little over 17 acres—expanding the farm to about 177 acres, not the 150 acres that some authors claim. Mike is currently working on creating a map of the original farm that will be framed and displayed in Tudor Hall.