James T. Wollon Architectural Tour Much Appreciated by Our Volunteers 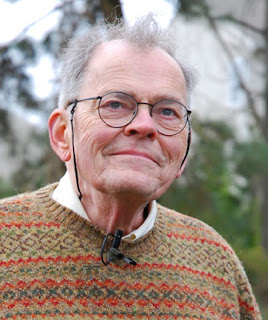 James T. Wollon
Photo by Jackie LaRocca, March 28, 2010, at Tudor Hall
On Sunday, March 28, 2010, James T. Wollon led an architectural tour of Tudor Hall for our tour guides and other interested volunteers. In addition to Mr. Wollon, 20 people were present the day of the tour. Mr. Wollon is a local retired restoration and preservation architect. He is also the great-grandson of Ella Mahoney who lived at Tudor Hall for nearly 70 years (1879-1948), and he shared memories of visiting his great-grandmother when he was a small boy. 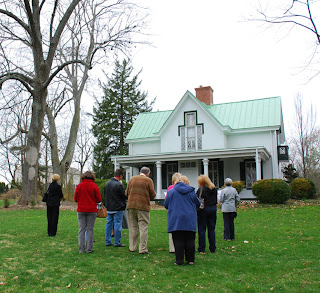 The tour began outside on a very chilly and overcast Sunday afternoon. Photo by Jackie LaRocca, March 28, 2010 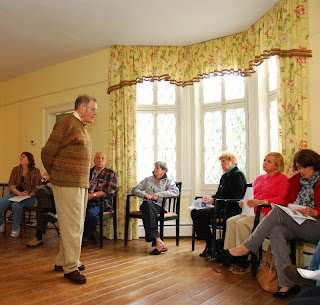 Mr. Wollon continued his tour inside Tudor Hall with the group seated comfortably in the largest of the current meeting rooms on the first floor. Originally, the room served as the dining room. Later it served as the living room. Photo by Jackie LaRocca, March 28, 2010
Posted by Spirits of Tudor Hall at 9:33 AM No comments: