The Birth of Tudor Hall 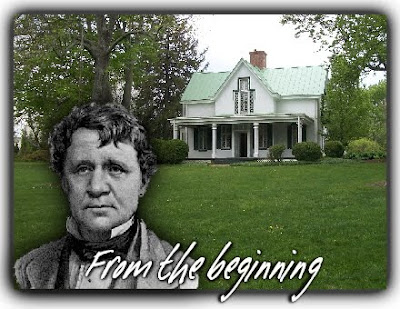 All but two of the Booth children were born in the log cabin nestled in the Maryland countryside which eventually became Tudor Hall. Let's go back to the beginning of how this grand residence came to be. I'll let someone who was there tell the story. The Booth family chronicler Asia Booth Clarke described the Booth home in her memoir The Elder and the Younger Booth, published in 1882:

In the summer of 1822, while the yellow-fever was raging in Baltimore, Mr. Booth purchased a farm twenty-five miles from that city, lying in Harford County, Maryland. This place became his constant resort when free from the excitement of his profession, and was the birthplace of his children. It was always known as "The Farm," but was in reality a dense forest, called the "Big Woods," which served as a free hunting-ground on moonlight nights when the whole place was rendered musical by the baying of the hounds and the call of sportsman....The rough coach road to the farm was made picturesque and delightful in the summer by the massive trees which arched it....From the road a crooked, narrow pathway wound to the Booth dwelling....This was a log-cabin, plastered and whitewashed on the exterior; the small square window-frames, and broad, plain shutters....painted red. Four rooms besides the loft, the kitchen, and the Old Dominion chimney, made a picturesque and comfortable abode, standing in a clearing encompassed by huge oak, black walnut, beech, and tulip trees.

The cabin in its primal state, unpainted and unplastered, had been removed to its present locality across several fields. This proceeding caused great wonderment among the villagers, as every available man, ox, and horse had been effected on account of a spring of delicious water which Mr. booth had discovered under the thickest trees.

What a great description! When I visit Tudor Hall, I look around the property and picture in my mind the great undertaking of moving the cabin—wow. Shortly before his death, Junius Brutus Booth began building the gothic revival house named Tudor Hall. At the time, the Booth family also had a town house in Baltimore where they usually spent the winter. The town house no longer exists. We're very fortunate to be able to visit this great piece of history called Tudor Hall today. If you have not visited it, I encourage you to do so. It brings history alive.
Posted by Tom at 12:53 PM No comments:

After the famous actor Edwin Booth's death, he was buried in Mount Auburn Cemetery in Cambridge, Massachusetts (the rest of his family, including his infamous brother, were buried in Baltimore). Poet Thomas Bailey Aldrich served as a pallbearer for the funeral, and wrote of the experience to fellow writer William Winter on June 12, 1893.


Just as Edwin was laid in the grave, among the fragrant pine-boughs which lined it, and softened its cruelty, the sun went down. I never saw anything of such heart-breaking loveliness as this scene. There in the tender afterglow two or three hundred men and women stood silent with bowed heads. A single bird, in a nest hidden somewhere near by twittered from time to time. The soft June air, blowing across the upland, brought with it the scent of syringa blossoms from the slope below. Overhead and among the trees the twilight was gathering. "Good night, sweet Prince!" I said, under my breath.

Aldrich admitted in his account of the experience that he would have fell to the grass-covered ground and cried — "if there had not been a crowd of people."

Two years earlier, a new portrait of Booth was put on display. Aldrich was moved enough by the image to write a poem about it:


That face which no man ever saw
And from his memory banished quite,
With eyes in which are Hamlet's awe
And Cardinal Richelieu's subtle light
Looks from this frame. A master's hand
Has set the master-player here,
In the fair temple that he planned
Not for himself. To us most dear
This image of him!" It was thus
He looked; such pallor touched his cheek;
With that same grace he greeted us —
Nay, 't is the man, could it but speak!"
Sad words that shall be said some day —
Far fall the day! O cruel Time,
Whose breath sweeps mortal things away,
Spare long this image of his prime,
That others standing in the place
Where, save as ghosts, we come no more,
May know what sweet majestic face
The gentle Prince of Players wore!
Posted by Carolyn Mitchell at 2:51 PM No comments: