Part one of an article about the Center for the Arts appears in the April 14, 2010, edition of the Aegis. The title of the article is "Harford's Place for the Arts," and it is the lead article in the "People, Places & Things" section on page AA1. Part two of the article titled "To Build an Arts Center" appears in the April 16th edition of the Aegis, and it is also the lead article for the "People, Places & Things" section. Bryna Zumer, L'Oreal Thompson, and Rachel Konopacki are the co-authors of the articles.

The Center for the Arts currently has its offices at Tudor Hall while the organization makes prepares to build a regional arts center in Harford County. The April 14th article includes a photo of Sallee Kunkel Filkins, executive director of the Center for the Arts, seated on the sofa in the Booth Room at Tudor Hall with David Fried's oil portraits of Edwin and John Wilkes Booth behind her. Unfortunately, the caption does not identify Edwin or John Wilkes and does not mention Mr. Fried.The article also includes a photo of Tudor Hall that was taken during the winter holidays several years ago.

The April 14th article quotes Ms. Filkins as saying, "Ideally, it [a new arts center] would be built in five to seven years." The April 16th says Ms. Filkins "fully expects a building campaign to be underway in several years, as soon as the county executive officially announces a site."

An online version of part one of the article including the photo of Sallee Filkins and the Fried portraits appears at:

http://www.exploreharford.com/events-entertainment/4190/harfords-place-arts-part-one-two-making-case-center-coming-friday-paying-it/
Posted by Spirits of Tudor Hall at 1:38 PM No comments: 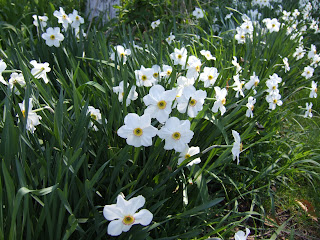 These lovely "Poet's Narcissus" welcomed visitors to Tudor Hall on Sunday, April 11, 2010.
We were delighted to welcome over 45 people to Tudor Hall for our first tours of 2010. It was a "picture perfect" day with temperatures in the mid-70s and a light on-and-off breeze. 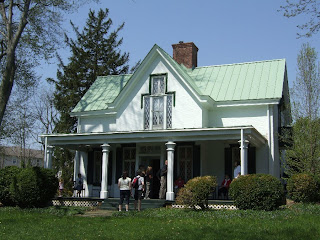 Kris Thomson, who serves as the "fearless leader" of our tour guides, led the first tour of the day. 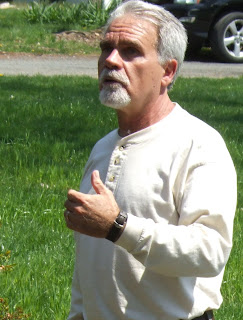 This will be Mike Brown's third year as a tour guide at Tudor Hall. Mike led the second and third tours of the day. 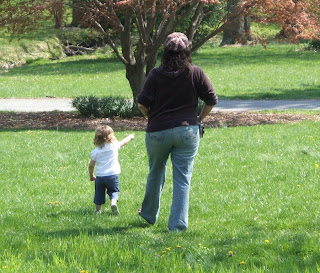 We are always delighted to see children enjoying the grounds at Tudor Hall. This little girl had a wonderful time picking dandelions amid the many wild violets also blossoming on the front lawn. 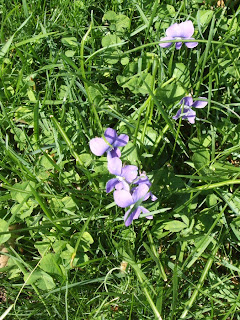 This photo just doesn't capture the rich color of the violets sprinkled throughout the grounds at Tudor Hall and across Harford County.
Posted by Spirits of Tudor Hall at 10:57 AM No comments: