Spirits of Tudor Hall would be delighted to hear from you. If you have something to say, please post a comment. Here's how:

At the bottom of each post is a space that says something like "0 comments." Right click on "0 comments" and a pop up window should appear where you can leave comments.

It's up to you to decide how you want to be identified or you can remain anonymous.

Your comment will appear on the blog after it has been reviewed by Spirits of Tudor Hall. This is to help prevent inappropriate comments from appearing on the blog.

If you have any trouble posting a comment, please let us know! Thanks!


Posted by Spirits of Tudor Hall at 12:03 PM No comments:

In order to become a fan, you first have to sign up as an member of Facebook at:

If you have any questions about how to become a Spirits of Tudor Hall fan on Facebook, please contact us at spirits-of-tudor-hall@msn.com.


Posted by Spirits of Tudor Hall at 11:51 AM No comments: 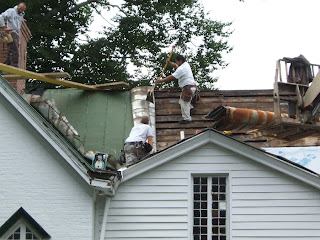 Suspense builds as the old roofing along the north "flank" of Tudor Hall is removed. Explanation below.
All photos in this post were taken at Tudor Hall on Thursday morning, September 10, 2009. Left click on the photos for bigger, better views. All photos and text by Dinah Faber.
Dinah says: Please forgive me for slipping into the first person in this post. It seemed the most natural way to write this particular post.

One of the things I've been hoping to observe as the old roof comes off and the new roof goes up at Tudor Hall is where the original section of the roof ends along the "flanks" of the house and where the newer section, built in Ella Mahoney's time (1879-1948), begins. As you will see in the following photos, my wish was granted on Thursday morning, September 10th. 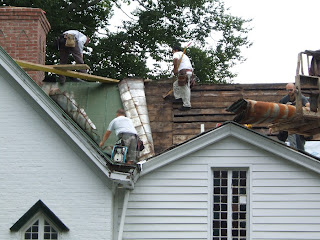 Tah dah! The oldest section of the roof is revealed to be clearly different from the newer section. Now the question is did the original house as built by the Booth family actually end where the original roofing ends. Or was the original roofing sawed off and shortened for some reason when the extension to the back portion of the house was added? If the roof reflects where the original house ended, then Tudor Hall was originally even smaller than we thought and the floor plan upstairs would have been different than we imagined as well. It also means that Tudor Hall as originally built more closely resembled architect William Ranlett's original design. More research will be needed to answer these questions. 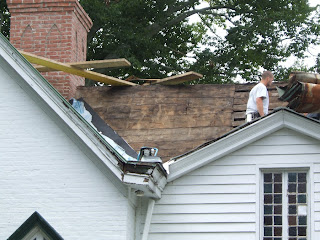 This close up of the older section of the roof clearly shows traces of the pattern in the roofing that was removed. Almost all of the original wood of the roof itself has remained in good condition and is not being replaced as the new roof goes up. 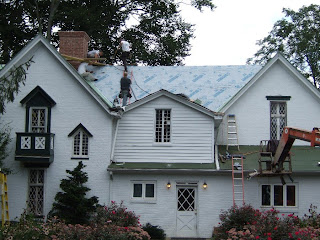 The north flank of the house was exposed for an hour or less. The crew quickly covered it with sheeting. Will it be another 160 years before it sees daylight again? Only time will tell if the new roofing is as durable as the old.
Posted by Spirits of Tudor Hall at 11:16 AM No comments:

Can You Spot the Hummingbird at Tudor Hall? 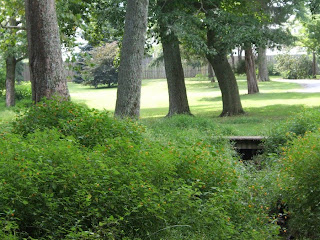 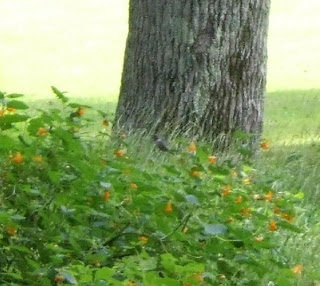 How about in the close up above cropped from the first photo?

To see larger versions of any of the photos on the blog including the two above, please left click on the photo.

Posted by Spirits of Tudor Hall at 4:37 PM No comments: