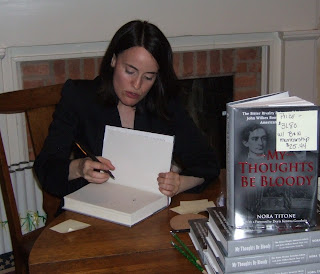 Nora Titone visited Tudor Hall to speak about
My Thoughts Be Bloody:
The Bitter Rivalry Between Edwin and John Wilkes Booth
that Led to an American Tragedy.
An estimated 60 people came to Tudor Hall on Friday, October 22, 2010, to hear Nora Titone talk about her new non-fiction book just published by Freedom Press, a division of Simon and Schuster. Requests for reservations were so brisk, Ms. Titone agreed to speak twice (at 5:00 p.m. and 7:30 p.m.), filling the parlor at Tudor Hall to capacity for both the early and late "show."
Ms. Titone is a dynamic and enthusiastic speaker who kept everyone listening closely as she described the rivalry between Edwin Booth and his younger brother John Wilkes for dominance of the American stage in the mid 1860s and how this rivalry led John Wilkes to upstage Edwin in a very tragic way that changed the course of the nation.

For more information about the book and an interview with Ms. Titone, please scroll down the page. 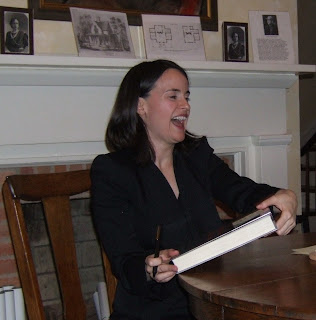 Nora Titone enjoyed greeting visitors to Tudor Hall and signing copies of her book for them.
Posted by Spirits of Tudor Hall at 5:33 PM No comments: