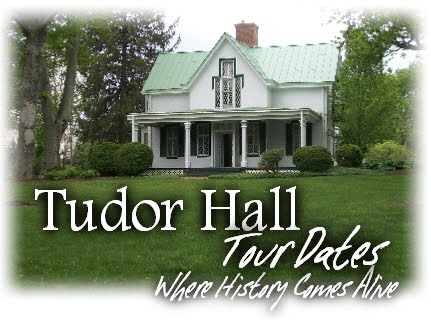 The property and first floor of Tudor Hall will be open to visitors for tours in 2022 at 1:00 & 2:00 PM on the dates listed below. This year there are exciting Special Talks replacing the 2:00 tours on the dates listed with a (*). All 1:00 and other 2:00 tours will feature the general tour. All tours and talks last about 45 minutes. See below for details of the special talks and regular tours.

Till the Curtain Falls: The Genius of Edwin Booth
by Kate Jones

Too Many Spurs; Too Many Knives. Where Are the Real Ones Used by John Wilkes Booth During the Assassination?
by Jim Garrett

The Forgotten Women of the Lincoln Assassination
by Kathryn Canavan
*October 16
The Lincolns, The Booths, and the Spirits
by Terry Alford

The Two Wives of Junius Brutus Booth
by Jim Garrett
Here ere are the speakers:
Terry Alford is an author, historian, and Professor Emeritus at Northern Virginia Community College. He received a Ph.D. in history from Mississippi State University and did post-doctoral work in family history at the University of California, Davis.

His interest in the history of race relations led to his writing Prince Among Slaves. This book tells the story of Abdul Rahman, an 18th Century Muslim prince from modern-day Guinea who was captured and forced into slavery in the Old South. Prince Among Slaves was made into an award-winning documentary shown on public television in the United Stated in 2008 to an audience of over four million viewers. The book, republished in 2007 to mark its 30th anniversary in print, was recently translated into Turkish.

Dr. Alford is a founding board member of the Abraham Lincoln Institute of Washington, D.C., and is an internationally recognized authority on John Wilkes Booth and the assassination of President Abraham Lincoln. Dr. Alford makes frequent appearances on television programs and networks such as “20/20,” ABC News, the History Channel, the Discovery Network, the Smithsonian Channel, CSPAN, BBC, and PBS. Fortune’s Fool, Dr. Alford’s biography of Booth, was published in 2015 by Oxford University Press and has received exceptional reviews. His research endeavors have been supported by four grants from the National Endowment for the Humanities. He has been an historical consultant on a number of films and documentaries, most recently Stephen Spielberg’s “Lincoln,” starring Daniel Day-Lewis. He also serves as a member of the Advisory Council for Ford’s Theatre in Washington, DC.

In 2010, Dr. Alford received the Outstanding Faculty of Virginia Award from the State Council on Higher Education. This is the highest teaching honor given to college and university faculty in the Commonwealth of Virginia.

Kathryn Canavan is an independent researcher and the author of Lincoln’s Final Hours: Conspiracy, Terror, and the Assassination of America’s Greatest President. She started her journalism career as a crime reporter. She eventually worked as reporter or editor in four states and was a National Health Journalism Fellow at USC’s Annenberg School. To get a story, Canavan has reported at gunpoint, lived with the Moonies, negotiated with a killer and joined Tug McGraw in the Phillies dugout.

She began researching the unintended consequences of the Lincoln assassination in 2009. Lincoln's Final Hours has been featured on CSPAN and PBS Newsworks. She explores the effect that one extraordinary night had on the ordinary Washingtonians who witnessed what happened inside Petersen's Boarding House on the night President Lincoln died there. Their eyewitness accounts provide telling new details about the assassination. Some went on to lead lives that are the stuff of novels, and others came to sad ends.

Jim Garrett is a life-long Lincoln Assassination and Booth enthusiast, a volunteer at Ford’s Theatre and a tour guide for Washington DC’s Old Town Trolley Tours and Private Tours of Washington. Jim also trains tour guides for Arlington National Cemetery. He is co-author of The Lincoln Assassination: Where Are they Now? and The Flags of Ford’s Theatre.

Kate Jones is a 19th century murder researcher, speaker, and living historian who specializes in the Lincoln assassination, the Lizzie Borden murders, and the case of the "Devil in the White City" multi-murderer, Dr. H. H. Holmes. She has presented on different aspects of the Lincoln assassination for several organizations including the Surratt Society and Fort Lesley J. McNair. Kate also speaks about the events of 1865 through her work at the Dr. Samuel A. Mudd House Museum and Historic Port Tobacco Village.

Lisa Samia is an award-winning poet, author and speaker who loves American Civil War History. Her latest accomplishments are being selected as the National Parks Arts Foundation's Artist in Residence for Gettysburg National Battlefield Park 2020 & National Parks Service's Artist in Residence for Manassas National Battlefield Park 2021, both for her Civil War Poetry. She recently discovered a set of archived letters written by Asia Booth Clarke, the sister of John Wilkes Booth.