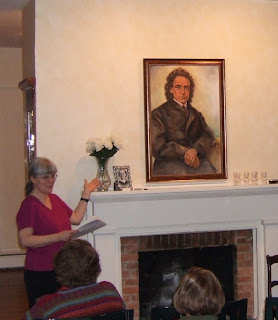 Spirits of Tudor Hall celebrated Edwin Booth's 175th birthday with a lively party at Tudor Hall attended by 27 people ("spirits" and their guests) who braved the perils of a rainy and foggy night to attend the party. Dinah Faber explained that Asia Booth's 173rd birthday will occur on November 20, 2008, and pointed out the image of Asia and white roses placed on the mantel in honor of Asia's upcoming birthday.

Highlights of the evening included the reading of greetings received from The Players (a club for gentlemen established by Edwin Booth in New York City) and from around the world (see three "posts" below). 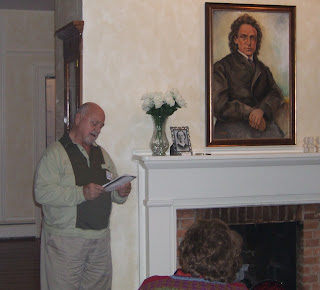 Don Rutter, one of our most dedicated and popular tour guides, read a description of Edwin Booth's birth written by Edwin's sister Asia and published in her book The Elder and the Younger Booth. 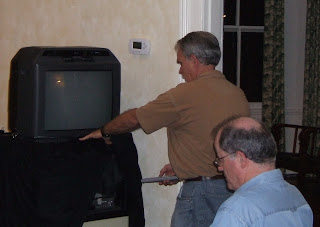 We also heard a few words from Edwin Booth himself via a DVD created by volunteer Mike Brown. The DVD features a recording of Edwin reading from Othello with the lines scrolling over a slide show of images of Edwin. Mike got the DVD rolling while Pat McGuire waited on the "hot seat" to play his banjo. 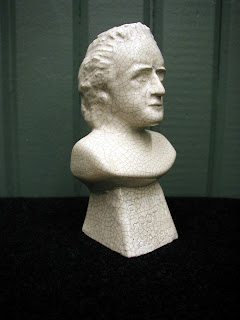 The evening also included the presentation of our first "Edwin Awards" to each of the new tour guides who were present. The busts were originally created by Wayne Bohli for a celebration of the founding of The Players hosted by the Preservation Association for Tudor Hall in 1988. 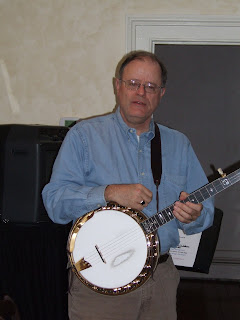 Special guest Patrick McGuire talked about the history of the banjo and the popularity of banjo music in 19th century America. He also played and sang a number of toe tapping tunes as well as some lovely hymns and "songs of home." Many of the songs featured in his performance date to the Civil War era and one or two were written by Stephen Foster. Pat's wife, Katherine, assisted Pat with his performance with a beautiful reading. Since Edwin Booth played the banjo as a young man, banjo music was especially appropriate to the evening. 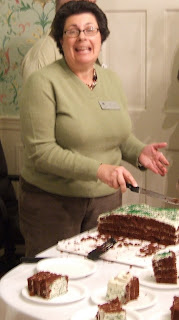 Kathy Cochran of Center for the Arts baked a delicious cake and brewed up a delicious hot cranberry punch. A number of those attending brought their favorite appetizers to share. Everyone enjoyed sampling the variety of delicious treats that graced the table in the dining room. 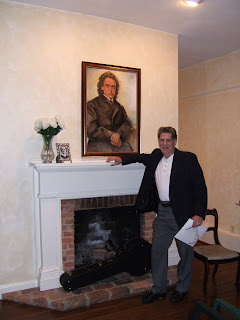 Artist David Fried painted the portrait of Edwin that was placed in a position of honor for the party as well as portraits of Edwin's parents, Edwin's younger brother John Wilkes, and a watercolor and pen and ink of Tudor Hall all of which now grace Tudor Hall. We are always delighted to have Mr. Fried and his wife Betty as guests at Tudor Hall. 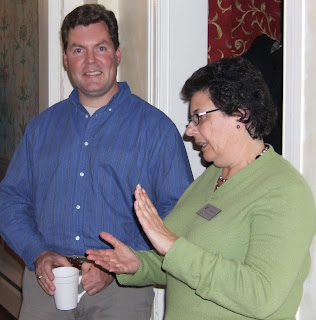 Ben Cox represented the Harford County Department of Parks and Recreation at the party. Ben is shown here chatting with Kathy Cochran of the Center for the Arts. Ben and his wife Tisha attended one of our tours this fall led by Don Rutter. Ben and Tisha give Don's tour "rave reviews."

Professional actress Jill Redding and her husband Frederick enjoyed chatting about old times with veteran tour guide Kris Thomson in the kitchen at Tudor Hall as the evening was winding down. Jill, Fred, and Kris were all close friends of Howard and Dorothy Fox and spent many hours at Tudor Hall enjoying the gracious hospitality of the Foxes.
Posted by Spirits of Tudor Hall at 3:11 PM