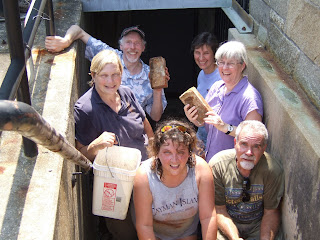 The "Brick Brigade" from left to right and front to back include:
Kathleen King, Mike Brown, Sally Cassilly, Dinah Faber, Ben Knight,
and Maryanna Skowronski.
The old brick chimney at Tudor Hall was recently removed so a new chimney can be built by Decker Contracting of Elkton, Maryland. The workmen carefully removed as many whole bricks as possible using hammers to tap them loose. The bricks were brought down from the roof and carefully stowed in a couple of big boxes awaiting transfer to the basement of the Historical Society of Harford County where they will be stored, analyzed, and eventually used for fund raising projects to benefit Tudor Hall and the Booth Research Center of the Historical Society. 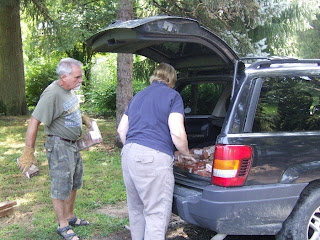 Mike Brown and Sally Cassilly were already hard at work by the time the other volunteers arrived on Saturday morning, July 25, 2009. Mike is a tour guide for Spirits of Tudor Hall, and Sally was a frequent guest of Howard and Dorothy Fox when the Foxes lived at Tudor Hall. 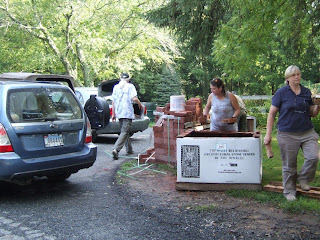 One of the boxes containing the old bricks appears in the center of this photo along with Ben Knight, Kathleen King, and Sally Cassilly engaged in the arduous task of hauling bricks. 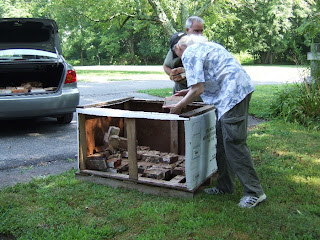 The task of loading the bricks went much more quickly than expected; and, before long, the boxes were nearly empty. Mike Brown and Ben Knight pitch in. 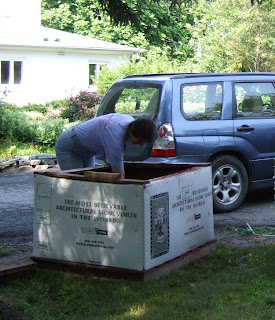 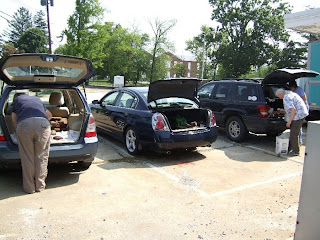 After the bricks were loaded, everyone drove to the Historical Society of Harford County located at 143 Main Street in downtown Bel Air where the bricks were unloaded by Sally Cassilly and Ben Knight and the rest of the hardy volunteers. 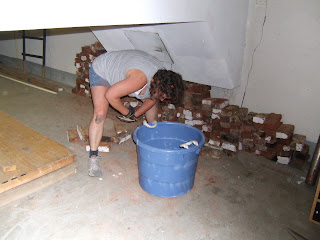 Kathleen King worked on her hands and knees at times to stow the bricks in an out-of-the-way spot in the basement (also known as the dungeon) of the historical society. Spirits of Tudor Hall cannot thank Kathleen, Sally, Mike, Ben, Maryanna, and Dinah enough for taking quick action on short notice to "save" the bricks. We also wish to thank volunteers Sonja Marshall and Jill Redding for coming out to help as well. Sorry we just missed you at Tudor Hall!
Posted by Spirits of Tudor Hall at 2:52 PM